A few weeks ago, I posted a poll here at Burn and Shine, where I asked you all to pick the most important Power Pop Band of the Eighties. Forty-six of you voted and Cheap Trick finished a few votes ahead of the Plimsouls in first place. As an added bonus during this Power Pop frenzy I've got going on, I decided to devote two compilations to one of the greatest American Rock & Roll bands evah-- Cheap Trick.

I was going through John Borack's Power Pop book, Shake Some Action: The Ultimate Power Pop Guide, and noticed his list of 20 favorite Cheap Trick songs. There were a couple on there that I didn't have (off some of their mid-period albums) so I tracked them all down and made the playlist. I only made two changes. "I Can't Take it" from Next Position Please made the first volume of Power Pop Explosion! 1980-1983, so I took the liberty of substituting "Downed", which would be in my personal Top Five Cheap Trick tracks. The second change is a little more subtle. I decided to use the "No Strings Version" of "Dream Police" which is found on the Cheap Trick Box Set, Sex America Cheap Trick, and is, in my opinion, vastly superior to the album version. There's nothing newer than 1997's Self-titled album on this playlist. Next week I'll post a companion compilation to this one covering the same era. Stay tuned . . . 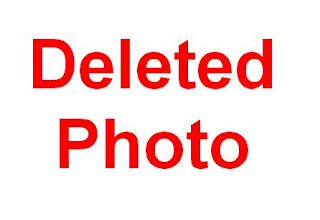 [EDIT]August 21, 2011. I received a warning from DMCA for something on this post. Not sure if it was a song or the image I used, so I've just deleted both the cover art and the mediafire link. Apologies to my new readers, as this is one of my favorite comps[/EDIT]


Once again the tragic events of the last few days drastically overshadow any compilation that I might post here. I, like many of you, am deeply concerned with the ongoing tragedy in Japan. My heart hurts. As insignificant as this latest installment of Power Pop is, I thought it best to post it as I normally would have. Hopefully, some of the tunes on here might put a smile on your face.

T. Remley once again has come up with some awesome artwork for this one:

File Removed by Request.
Posted by Maximum Jack at 8:05 AM 3 comments: 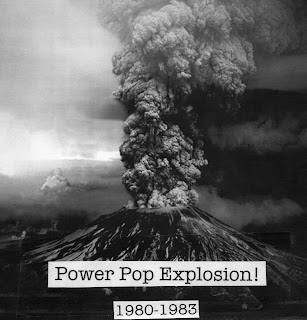 Today I post the final volume in my Power Pop Explosion Series. Though please stay tuned over the next few weeks as I have more Power Pop compilations lined up. Also, please take a moment to vote in the latest Burn and Shine Poll. I’d like to know which year you think was the best for our favorite sub-genre of Rock & Roll. I chose the last two years of the 70’s and the first two years of the 80’s as the primary possibilities, because I seem to find so many great songs from those years. You may, however, believe some other year might be the best. If so, I’d love to hear which year and why—just leave me a comment.

Featured on today’s compilation is a track that I’ve had in my collection since it came out back in 1980. As I’ve mentioned before on Burn and Shine, I do not claim to have known all these bands since their original release dates. Even my favorite band of the bunch here, the Plimsouls, had been around for a while before I bought anything by them. I did not get around to picking up Everywhere at Once until about five years after it’s release.

Way back in the summer of 1980 though, there was a radio station here in Chattanooga that used to do trivia questions every afternoon. If you happened to be the first caller with the right answer, you won a prize: usually a promo album. I used to listen religiously, and I would call in whether I knew the answer or not. Although I cannot for the life of me remember the station's call letters, I do remember the question that won me Phil Seymour’s self-titled debut. For the record the question: What are the three top Orange producing states? I knew Florida and California, but guessed Texas and was pleasantly surprised to find out that I had the right answer.

The DJ may or may not have told me what I had won, I don’t remember that either. I do remember getting my Mom to take me way the heck out to the station to pick up my prize and being pretty disappointed and even embarrassed when I saw the cover of the album: 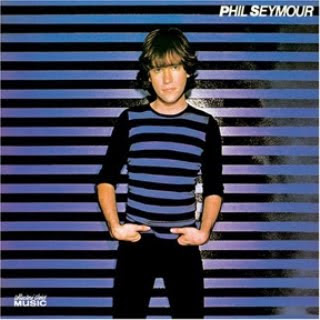 At the time I was all about AC/DC and had only just recently gotten through my Kiss phase (it was the summer after 6th grade), so Mr. Seymour with his too tight, blue and black-striped shirt looked a little “sissy” to me. I wish I could say that I took it home listened to it and it changed the way I thought about music. Nope. I did listen, but it was just not RAWK enough for me. I gave it to my older sister, who kept it in her collection until about 20 years later when I asked for it back.

Better late than never, I guess. I just wish I had been savvy enough back then to have given it a few more spins. Surely those melodies would have eventually crawled into my skin. Maybe I would have even tracked down the Dwight Twilley Band or 20/20 (two bands he had been involved in) and my whole junior high experience might have been different (maybe I would have gotten beat up more?). Never mind, I’m glad things worked out the way it did. I did eventually get around to loving those bands, and I managed to escape Junior High with a few less black eyes.

Also, faithful Burn and Shine Reader, T. Remley has offered up artwork for all four volumes of Power Pop Explosion. Check it out: 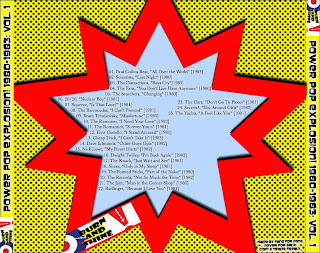 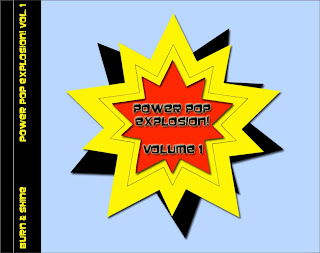 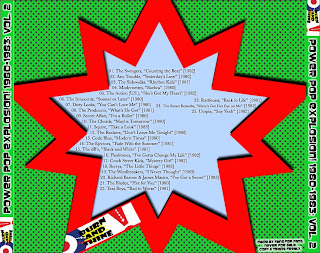 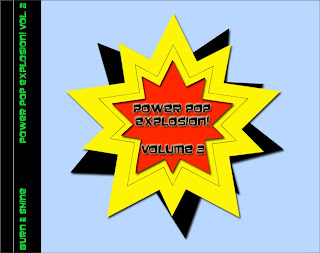 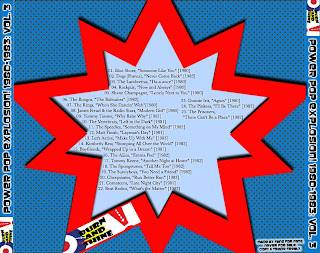 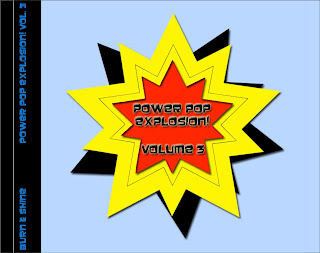 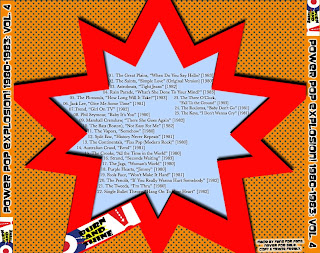 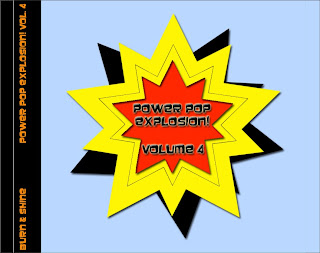 Download a zip with all the artwork here: Power Pop Explosion Artwork!
Posted by Maximum Jack at 5:00 PM 5 comments: