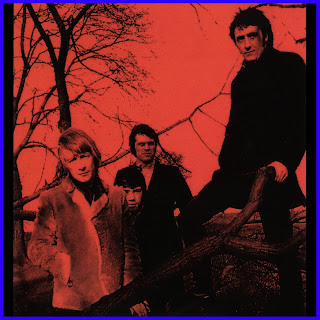 When I first mentioned I was working on this series (way back in July), I thought it would be 10-discs and 200 tracks-- about the same as the two Nuggets box sets. As I continued to work on it, it got a little longer. I finally settled on 12 volumes, but as I posted them here, I kept finding stuff that I had missed-- either in my collection or via some of the GREAT Psychedelic blogs that are out there. So I made one more playlist for these tracks and figured I'd just keep them handy and if I had enough for another volume I'd just tack it on at the end. Well I ended up with 26 more tracks. I'm sure the Burn and Shine book is not closed on this era, but this final volume with it's 26 tracks will put it to bed for awhile.

A few quick tidbits about the bonus disc selections. First, our cover boys The Action, make an appearance with a song from an album that did not get an official release until 2002, Rolled Gold. Usually when you hear these so-called, "Great Lost Albums" they really aren't that great. Not so with this one. RG is the real deal, and should have put the Action in the upper echelons of the British Invasion.

One of the last tracks I selected for this compilation is the Big Star track titled "Psychedelic Stuff", which is really a Chris Bell track. This was featured on the Big Star box set that came out a couple of years ago. Even if you have the three proper Big Star albums, you need this set-- it was lovingly done.

The series closes out with a track written and sung by Bill Wyman. I believe it was the first such song in the Rolling Stones discography (was there another?). It was featured on their terribly underrated album Their Satanic Magesties Request, which I'll go on record here saying that it's a better album than Sgt. Pepper's.

Oh, one more thing. My three year old daughter has discovered the Monkees. I have the first season on DVD, and we've been watching them with her. I did not remember "Take a Giant Step" from their first album, written by Goffin & King. It would have been on here, but I had already zipped the file when we watched that particular episode. Anywho, I thought I'd share it via a youtube clip: 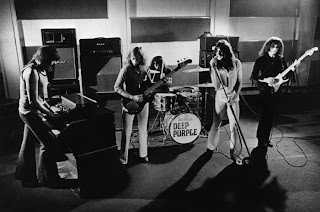 This week's installment of TPF, has a couple of distinct threads running through it. The first is it features three bands that are generally considered as the forerunners of Heavy Metal. Deep Purple (Pictured Above), Blue Cheer, and Steppenwolf were all instrumental in the development of "Heavy Metal" as a viable genre.

A second trio of bands featured here, were part of the so-called "Bosstown Sound": The Beacon Street Union, Eden's Children and Orpheus. Critics have not been to kind to these bands or the idea that the "Bosstown Sound" could ever have been as crucial to Rock & Roll as the San Francisco Sound. While none of these bands put out records on par with Santana (also featured on TPF12) or the Jefferson Airplane, they did put out some interesting records. Definitely worth a listen for anyone interested in the Psychedelia, and certainly as good or better as some of the second tier San Fran acts. 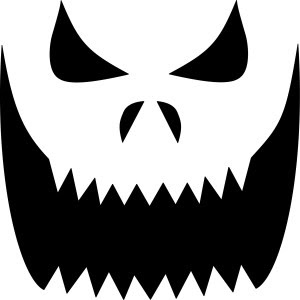 Well the masses have spoken (well 14 of you anyway!), so I'll go ahead and post my annual Halloween compilation today. This edition of Candy Apples & Razor Blades has a little punkier flavor than most. I don't want to let the cat out of the bag but I've got some cool stuff in store for 2012. Parts of this compilation will serve as kind of a preview of what's in store here at B&S. 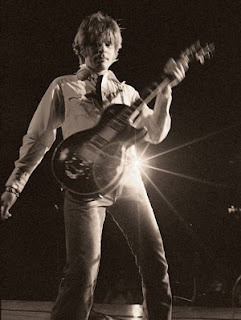 Okay, there is less than 24 hours left to vote in the poll, currently 12 of you have voted and it looks like you want the new Halloween compilation ASAP. If that stays the same by tomorrow, look for the new comp later this week-- Wednesday probably.

As for today's comp, I'll just say a quick word about Creedence Clearwater Revival-- whose lead singer, John Fogerty, is this weeks cover star. Again, not really a band that springs to mind when you think "Psychedelia", though they were one of the most well known artists during this era. This particular track, "Gloomy", has one of the hallmarks of Psychedelia: the backwards guitar. A near perfect example of that technique. 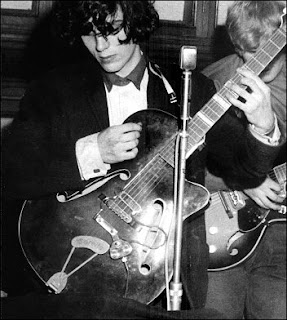 Well we are hitting the final stretch for our Tiny Purple Fishes Series-- just three more volumes after today. This will take us through the end of October, which poses a bit of a dilemma. As some of you may know, Halloween has a significant meaning here at Burn and Shine, as the first playlist I posted here was a Halloween Compilation. Over the last few weeks, the most popular blog entry here at Burn and Shine has been last year's Halloween post. The fourth volume of Candy Apples & Razor Blades is ready to go, but I haven't decided when I'm going to post it. Since there are three comps worth of Halloween Tunes already available, I'm leaning toward posting it on Monday, October 31, once all the TPF comps are posted, but I will leave it up to my faithful readers to decide. Somewhere near the top right corner is a poll, please take a moment to vote when you want the new Halloween Comp posted, thanks!

First, I would like to call your attention to track #12. The band is Rust, but I'm not sure exactly where they are from. There seems to be some confusion on this point, and if any of you know definitively, please leave me a comment, as I have read conflicting reports. They released this album on a German label, but they sing in English. I've seen them described as British Psyche, and cannot find a mention of what city they might have been based. Here's a blurb about them at Aural Innovations.

Today's comp features the third and final Beatles' track for TPF, "Fixing a Hole", which is a McCartney track from one of the landmarks of British Psychedelia: Sgt. Pepper's Lonely Hearts Club Band. Not one of my favorite Fab Four albums (as I've said before, I prefer the pre-facial hair Beatles!), but it does have its moments, this relatively underrated track being one of them.

Mars Bonfire (aka Dennis Edmonton), is credited as writing one of the most well-known songs of the Psychedelic era: "Born to Be Wild" by Steppenwolf (his brother was the original drummer). This particular track is culled from his second solo album, Faster than the Speed of Life, and is worth tracking down for fans of psychedelia.

Finally, I'd like to highlight a band with a horrible name, Electric Banana (is that a euphemism for vibrator?). Had never heard this record before I started compiling tracks for this series, which is weird because I went through a fairly extensive Pretty Things phase about ten years ago. This is, for all intents, the Pretties under another name. Not sure why a band who never really hit it big (especially true over here in the U.S.) would put out some first rate music under another name, but that's exactly what they did for some low budget films. According to AMG it was because they needed money? Maybe it was a way to hide the money from their label? I'm purely speculating. Anyway, there is a compilation of Electric Banana tracks that is absolutely glorious. Track it down! 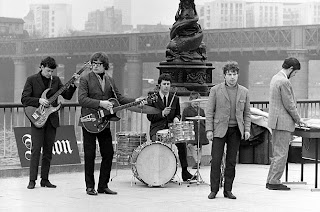 This volume of Tiny Purple Fishes is easily the most varied, in terms of number of countries represented, so far. While England and the U.S. still dominate, there are no less than five other countries represented: The Netherlands, Northern Ireland, Peru, Scotland and Wales. As I've said before, when putting these comps together I try not to consider countries of origin for the artists represented on each edition. I do consider other things, such as trying not to put too many well known artists on one compilation or grouping together bands whose names are similar (check out the three "Smoke" bands on TPF #7 or the two "Elastic/k" bands on this week's disc).

In addition, I find it interesting that three of the American bands here have ties to Oregon. In fact, Oregon actually outnumbers New York on this comp and has just as many bands represented as California. In recent years, Portland has garnered a lot of attention as a hip place for indie bands to relocate to, but it has a rather long history of great Rock & Roll, which may have all started with this great garage band.

Download it here: Tiny Purple Fishes, Vol. IX
Posted by Maximum Jack at 12:12 AM No comments: