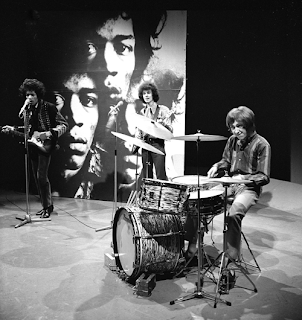 As you probably know, Jimi Hendrix was born in Seattle, but moved to England to form the Jimi Hendrix Experience (pictured above). The impact and inventiveness of Hendrix' guitar playing has been recounted by countless journalists since his demise in 1970. The story of David Vorhaus, another expat, has not been disseminated quite as thoroughly. In the grand scheme of Rock & Roll, however, his band White Noise might have been every bit as influential as the Experience. Especially considering, for better or worse, how important the synthesizer became as an instrument in rock music. If you are interested in the history of electronic music, I urge you to check out Vorhaus' story here: Sound on Sound: David Vorhaus.

Download it here: Tiny Purple Fishes, Vol. VIII
Posted by Maximum Jack at 4:38 AM No comments: 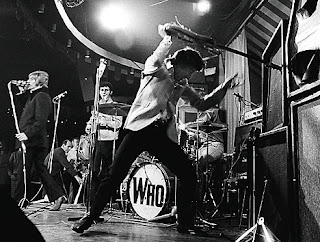 We are officially past the halfway point in our Tiny Purple Fishes series. Originally intended as a 12-part series, I decided to expand it by one more disc, so those of you who stick with it will get 13 volumes of TPF-- 260 tracks! A lot to chew on, which is why I decided to keep the individual discs at 20 tracks and about an hour. The goal was to sort of mimic the specialty show format on a college radio station. Though I wish I was able to broadcast a show, this method has its advantages. Namely, you don't have to listen to me babble.

Speaking of babbling, here are a few thought on this weeks compilation.

It may sound naive, but when I started compiling songs for this series, I really thought the U.K. would dominate. That does not seem to be the case. Once again the American bands outnumber the rest of the world on Volume VII. I guess it should make sense, as the U.S. is quite a bit larger than the U.K. There were so many bands making their own personal Psychedelic masterpieces across the U.S. and, in particular, California. Not to slight the U.K. as there was a lot going on there too, but it just seems like the U.K. bands are generally better known. I mean, why is it that having been an avid collector of Rock & Roll for most of my 43 years, that I only just recently discovered a band as great as Michigan's The Rationals?

Merrel Fankhouser is another American artist that should have been more successful. This is actually the second Fankhouser track on TPF: he was on last week's comp with his first band Fapardokly. There's also a John Uzonyi (of Peacepipe) and Steve Morgen (of Morgen), who might have been America's answer to Jimmy Page and Eric Clapton under different circumstances.

As for the well known British bands in this series, few are bigger than The Who. Probably not the first (or even the tenth?) band you would mention while discussing Psychedelia, but I challenge you to find a better example then "Disguises" by anyone else. 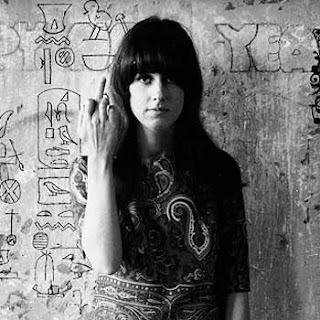 Not one but two non Anglo-American bands make an appearance on volume six of TPF: Q65 from the Netherlands (singing in English) and Steppeulvene from Denmark (singing in their native tongue). As you may suspect, the Danish band took their name from the same Herman Hesse novel that a more famous Los Angeles band used for their moniker. The California Steppenwolf will be gracing Psychedelic Sundaze in a few weeks.

One of the more interesting acts represented this time around is the Bonzo Dog Doo Dah Band. Here's some trivia about the Bonzo's that may help you some day if you happen to be on Jeopardy. They played a song in the Beatles' Magical Mystery Tour film. The name of that song? "Death Cab for Cutie".

Our cover star this week is the beautiful Grace Slick. Believe it or not, before I started searching for pics for this week's compilation, I had never seen this one before. I would imagine it is pretty famous. This is the second Jefferson Airplane track featured on TPF, the first being the Marty Balin penned "Today" on Vol. III.

Download it here: Tiny Purple Fishes, Vol. VI
Posted by Maximum Jack at 4:47 AM No comments: 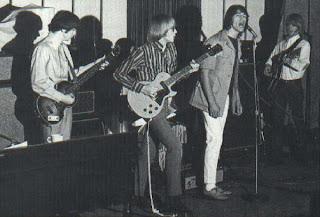 Happy Labor Day Weekend everyone! This week's disc kicks off with the Fourmyula, a great band from New Zealand who I only recently discovered. Apparently they were positively huge in their homeland, but they barely registered a blip anywhere else. Unfortunate, as they had a slew of singles that rivaled anything by the bands that dominated the U.S. charts during the British Invasion. "Come With Me", by the way, was their first single and it spent three weeks in the #2 slot in New Zealand.

One of the biggest bands to emerge from the L.A. scene finds a spot here. The Doors' "Take It As It Comes" is not very 'psychedelic', but it is is easily my favorite Doors' song. Manzarek's trademark keyboard sound is all over this one, even if it errs on the garage-side of psychedelia.

The Beatles make their second appearance on TPF, this time with the lovely George Harrison penned "Only a Northern Song".

Finally, this comp ends with a most unlikely choice. Cleveland's Mirrors are generally associated with the Proto-Punks. This track was released in 1975-- well outside what is generally considered the First Psychedelic Era. But "Shirley", the A-side of the only record released during the band's lifetime, channels the best of the original Psychedelic Era without sounding retro. The B-side, "She Smiled Wild" is a little more proto-punk (and I swear, some day I'm going to feature the Proto-Punks here at Burn and Shine!). If'n yer interested, check it out:

Posted by Maximum Jack at 7:55 AM No comments: